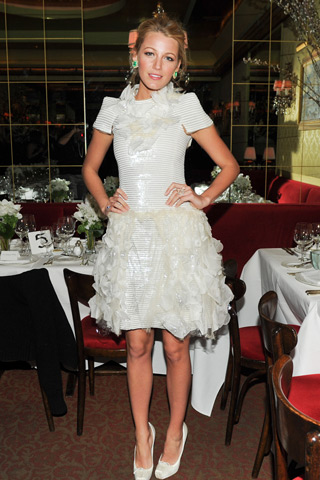 It wasn't Paris, but it could have been. At the dinner Chanel threw at New York's La Grenouille last night, French-speaking waiters buzzed around the crowded downstairs dining room. Champagne was poured for the likes of Tory Burch, André Balazs, and Jen Brill. It was a convivial, sit-down-and-stay-awhile affair—or, as Blake Lively put it, "a grander version of the tea parties I used to have." As it happened, her parents were on hand to confirm it. Lively, the youngest of five, had decided to make it a family affair. "I was the only one that didn't want to be an actor," she said. "My sister was a model, so I grew up watching her wear these beautiful designer clothes and never thinking that I would be in them myself." She's wearing them now, of course, and also helping sell the bags that go with them, as the face of Chanel's Mademoiselle line. The house had organized the dinner in her honor, perhaps because Lively won't be at the Paris show on Tuesday—not, as a blog-fueled rumor has it, because she doesn't want to, but because she's shooting the season finale of Gossip Girl. Warning: spoilers ahead! "There's no flexibility in the schedule, because we're all in every scene," Lively explained. One of the actor friends she'd invited along was Justin Long, who just wrapped an ensemble drama about a high school reunion called Ten Year and confessed he felt a little out of his element at a Chanel party. "Blake is very modest. She downplayed how extravagant this was going to be," he said. Nevertheless, Long had done his due diligence on the hosts. "I know they do handbags and clothing and perfume, even," he said.
— Darrell Hartman
Source: www.style.com

I wasn't crazy about this look on her, generally though, I love the way she dresses.