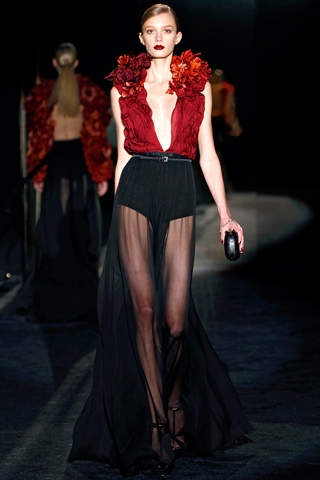 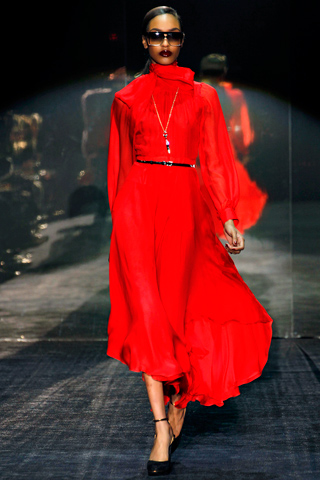 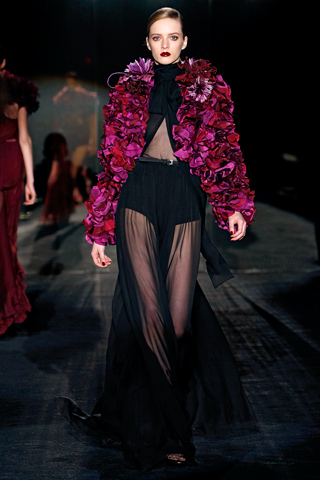 "Before Gucci's 90th anniversary show today, Frida Giannini cited a pair of influences: Anjelica Huston, as lensed by the photographer Bob Richardson, and Florence Welch of Florence and the Machine. That first reference point meant we were back in the 1970's again. Giannini's girls have traded in last season's harem pants, macramé moto jackets, and lean jumpsuits for culottes, pussy-bow blouses topped by snug sweater vests or velvet blazers, and shirtwaist dresses. Many of them wore fedoras with feathers in the brim, and some sported both a shoulder bag (an elongated version of the Jackie) and a mini top-handle frame bag. If that sounds like Giannini had pared down the glamour quotient, think again. There was fur and python and patent leather galore. The lattermost came in a sexy-as-all-get-out slim black pencil skirt worn with a silver fox chubby. What was most notable about the furs and pythons was their eye-opening colors, and the designer gave full rein to her penchant for mixing unexpected hues together in one outfit: Take the ocher coat with Mongolian lamb trim worn with a scarlet blouse and a bordeaux hat, or the amber python jacket with rust-colored fur collar that topped a lavender shirt and violet cardigan," - Nicole Phelps
Source: www.style.com